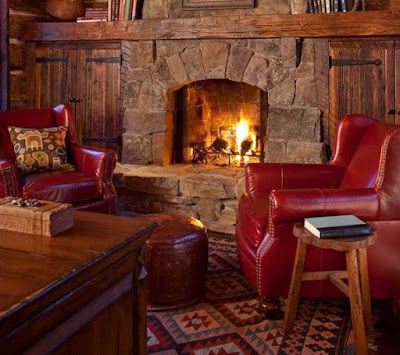 Around midnight, they gave up waiting for Maryam to return. They wished each other Happy Anniversary one more time at 11:59, then Merry Christmas at 12:00, and went to sleep.

Fin was awoken by something moving around downstairs at about 4:00 a.m. He’d always been a light sleeper, especially in strange places. Quietly, he crept out of their room and peered into the darkness of the main floor. He could see the outline of someone rummaging around in the living area around the Christmas tree there. A moment later, the figure stepped into the light of the dim fire, stoking it back to life. It was Maryam.

She flopped into one of the rustic chairs and plopped her feet up on the coffee table there. Fin heard and saw a match being struck, then saw the flame dip downwards. A few audible inhales later, and Fin caught the faint scent of a sweetish tobacco being smoked, undoubtedly from Maryam’s pipe.

“Come on down, Finley. Let’s get on with the chat you’re so keen to have.”

Fin made his way slowly down the stairs and took the seat opposite Maryam. She looked both relaxed and tired, puffing her pipe and gazing into the fire. She turned to face him and smiled warmly.

“Go ahead, ask the question.”

Maryam took a long drag on her pipe and exhaled it slowly. “What do you think happened?”

“A bunch of very strange stuff, most of which made no sense at all.”

Maryam nodded her head as she took another drag. “That sounds about right.”

“So? Did I miss something?”

“No,” said Maryam, and Fin thought she looked a little sad. That sadness had an unexpectedly powerful impact on Fin, and he found himself tearing up for not apparently reason. “How about I tell you a story?” Fin nodded, blinking his eyes to clear them, and settled back into the chair. It was more comfortable that he’d expected, especially considering it’s ancient construction. Maryam began.

“Once upon a time, when the world was young, magic was everywhere and in everything. People were kind and loving to each other because they didn’t know any other way to be, and there was peace and harmony and warmth and light. Then, as they grew older and more mature, mankind began to learn about jealousy, and greed, and fear, and hate. Things grew darker and colder as these new emotions began driving out the magic that had originally existed. In an effort to maintain a balance, the powers that were began to struggle against that powers that were becoming. In the eons since, the balance has gone back and forth. Recently, balance has swung to the darkness, and the remnants of the powers that were have banded together. At this time of year, they make a special effort to see happiness and joy spread throughout the world. We all do our parts, and hope that, given enough opportunity, mankind will find the hope they once had, and decide to simply love each other and treat each other with kindness again.”

Maryam’s eyes twinkled merrily. “And very occasionally, there are a couple of otherwise normal people that stumble into our tale, and we sincerely hope that they take the message back to the rest of mankind, insofar as they’re able, and continue to hold the wonder and joy they felt during their adventure as they continue their journey.”

Maryam smiled at Fin as he asked, knocked the ash from her pipe into the fire, then got up and stretched and yawned. “It’s been a long night. I think I’ll turn in. Goodnight, Finley.”

She left him there to stare after her.
Posted by Rusty Bentley at 11:44 AM