Ah, the annual ritual of posting the results of the Reading Challenge. I'll admit right now that reading wasn't as big a player in 2020 as it had been in years past. There were lots of reasons for that, not the least of which was that I didn't exercise as much, drive as much, and played more video games and watched more "TV" than I have in a long time. Reading, as it turns out, doesn't release endorphins for me the way it used to; the other pursuits *did* help keep my head above water, and I'm really thankful for that.
I did manage to read 40 books with a total of approximately 12,800 pages. This is down from 46 books and almost 15,000 words last year. Like I said -- I was doing other stuff. There were some real gems this year, however, as you'll see in one of my brand-new metrics!

The first stat doesn't really need any context. I'm surprised to find that this year's average was so close to last year's, given the longest and shortest were both smaller. Maybe my median is higher...?

The three shortest books this year were considerably longer than last year's. This year's were:
Last year's were:
Note that I am NOT including A Christmas Carol (84 pages) in this list, as I read it pretty much every year but don't want it to perpetually show up on the Shortest Book list.
So... the bottom of the list is weightier by about 200 pages, making up for half of the volume missing from the top three. That doesn't solve our entire problem though, does it? This year's median book was 305 pages long; last year's was 300. Did the median standard deviations shift up just enough to bump the total? How did we retain the 320 page average?!

Given there's a mystery to solve, let's try some new metrics. 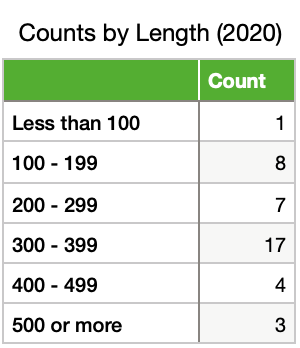 The bulk of my books were in the 300 - 399 page range. I wonder how last year's distribution compares? 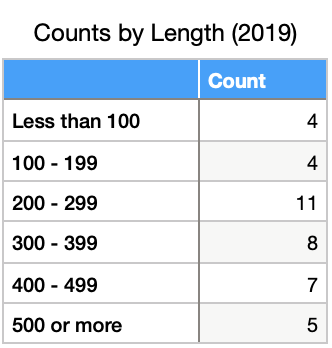 Number of books read by month

I managed to finish at least a couple of books every month except May. And August was an outlier by a mile. I read John Lewis's March graphic novels (all three of them). I also *finished* a couple of lower 300 pagers that I'd started in July, and started and finished a few others.
Strangely, this distribution is the opposite of last year's. In 2019, the front half of the year was loaded with 5 or more books read each month, and the middle and end mostly finishing 2 a month.

No big surprises here either this year. Audible still accounts for more than half of my "reading" medium, and Kindle is the second biggest chunk.

The most surprising thing to me here is the number of biographical books I consumed. Granted, 3 of them were John Lewis graphic novels, but there were 5 others as well. Still, the breakdown of the supercategories of Fiction and Nonfiction (including all related genres) as 23 to 17. This represents a swing toward unreality. Pray for me, y'all.

A few of the other metrics are worth repeating, as well as a note on the quality of books this year.
That last one is really important. I read *SO MANY* great and important books this year; more than HALF of my list was 5-star-rated. You should definitely have a look if you're interested. If you'd like some recommendations...
Gosh, I feel like I should just list all of them here. I'm not going to though; click the "have a look" link above and add stuff to your own list.
Alright, it feels like I should stop at this point. I've got some books to read, after all... I hope everyone has a fantastic year reading (and otherwise). Toodles!
Posted by Rusty Bentley at 3:01 PM No comments: