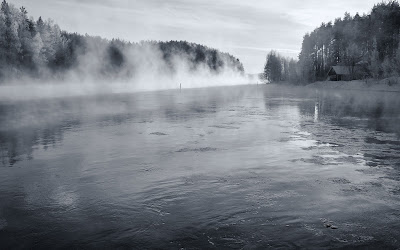 A longer while later, they came to a wide river. Mist and fog from the river swirled all around them, obscuring everything more than a few yards away. Maryam guided the sleigh with a sure hand, never looking the least bit concerned. They crossed the river over a bridge, and just afterward pulled off of the main path onto a gentle downward slope toward the riverbank. Maryam finally reigned the horses in just shy of what appeared to be an ancient yet well-maintained dock on the edge of the river. As they came to a full stop and were dismounting, they heard something bumping up against the dock. Maryam signaled that they should follow her, and a moment later they were at the end of the dock. They were surprised to see a steamboat moored there, and even more surprised to see an older gentleman dressed in a deep red double-breasted blazer with a captain’s hat to match.

The gentleman smiled at Bree and Fin as he said something to Maryam the other two didn't catch. He disappeared a moment later, and Maryam turned back to the other two. “We’re going to have to use Befana’s bag. You two go grab it out of the sleigh and bring it aboard. Syn's gifts are piled up in the bow.”

Bree had completely bought into the adventure by this point and immediately turned back to the sleigh. Fin jogged to catch up with her, doing so as she was clambering into the sleigh to start pushing the bag over the side.

“Bree, I’m feeling a little… unsettled about all this.”

“Fin, you’re in a bona fide Christmas story. Embrace it!”

Finley pulled his cell phone out. As he had guessed, he had no signal at all. The GPS showed a pin on a completely blank map, even though Fin had downloaded the maps for the entire area before they’d set out earlier that day.

“Fin, I know it’s strange,” said Bree, still struggling with the bag, “but I’m trusting my instincts here. I get the sense that this is all good and right and, in the end, full of wonder. Just trust me.”

“Alright, I’ll trust you,” Fin said, reaching over the side and helping get the ratty bag over the edge, although it didn’t seem as ratty now as he’d originally thought. Fin slung the bag over his shoulder as before. He and Bree then boarded the steamboat at the bow, and immediately saw, not a large, but a HUGE pile of gifts stacked in the center of the open deck. Maryam appeared to be inspecting then, occasionally moving them around, as if collating them.

“Alright Fin, bring it over here, and just hold it open.”

“Maryam, there’s no way all of those are going to fit in here.”

“Oh, they’ll fit! It’ll be tight, but they’ll fit. Don’t you worry about that.” said Maryam, winking at Fin as he held the bag open for her to start depositing gifts. Bree began grabbing other gifts indiscriminately and putting them into the bag.

Maryam, Bree, and the old gentleman made fairly quick work of what had at first seemed an insurmountable stack. Every now and then, Maryam paused long enough to check inside the bag and make minor adjustments. As she had predicted, all of the assembled gifts fit, but just barely. As they finished, Maryam took the cords and cinched the bag closed. It seemed to strain at the seams a bit, but held together.

“Alright, back to the sleigh! We’re a little behind, so we’ll have to make up some time!” said Maryam, making her way off of the boat and onto the dock.

“Uh, Maryam? How are we supposed to carry this without it falling apart?” asked Fin.

“The same way you did getting it down here. Together!”

Bree grabbed the back of the bag and helped Fin sling it over his shoulder. The bag was larger, heavier, and more cumbersome, but not nearly as much as it should have been. Bree held the back so that it didn’t drag on the ground, and they made their way back to the sleigh without any issue. Bree climbed in and pulled as Fin pushed the bag back over the edge. At this point, the bag took up most of the back of the sleigh.

“C’mon, we’ve gotta get going!” said Maryam from the driver’s bench. The steamboat let out a whistle. Fin turned back long enough to see that the mist had rolled in again. He couldn’t see anything beyond the edge of the dock, although he knew the boat had to be there. Bree was already climbing in, and Fin quickly followed her. As soon as they were seated, the sleigh was turning around and heading back for the main path.
Posted by Rusty Bentley at 6:27 AM