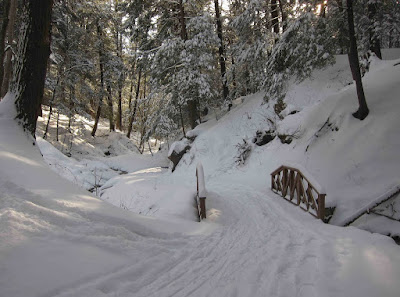 “She’s back!” Bree exclaimed from the bedroom window out of which she’d been staring. Fin, who had been dozing, woke groggily if not suddenly, but slipped his shoes back on and joined Bree at the window. It had begun to snow again, although none of it seemed to be sticking in the back yard. Maryam had been gone for half an hour or so when Bree indicated she had returned, both of the big Clydesdales in tow. They left their bedroom and met Maryam just as she was reentering the house from the back door.

“Sorry about that, folks,” said Maryam. “Sometimes the silly things get excited over the most common occurrences.”

“Can I see them?” asked Bree, barely able to contain her glee.

“Of course, but I should warn you — they’re very friendly, and if you get too close to them, they’re liable to nuzzle you until you fall over. Here, take these just in case,” Maryam said as she grabbed two oversized apples from the bowl in the center of the kitchen island.
Bree clapped again, accepted the apples, and dashed out the back door, slowing only when she got close to the horses. They didn’t seem shy or intimidated in any way, and walked to her eagerly when she brandished the apples at them.

Fin watched the interaction out of back window for a few moments, trying to decide if he wanted to go out as well, when Maryam made the decision for him. “I hate to impose on the both of you, but if you are willing, I could use your help running an errand. I think you might enjoy it.”

“What kind of errand?”

“It involves those horses and that sleigh.”

Fin smiled broadly at Maryam. “I suspect Bree will love it, and anything she loves…”

“You’ll need your coats. We’ll be going into the woods, and it’ll be chillier there.”
Finley grabbed both of their coats from the bedroom and met Maryam and Bree in the back yard. Maryam and Bree were bridling the horses, whose names were Hershey and Thumper. The horses appeared to be helping with the bridles, apparently eager to be underway. Now that he was closer, he could tell that the horses’ tails were gathered neatly and tied into an intricate knot. There were bells woven into the knot at places. He glanced over to the sleigh, and saw that it was lined with similar bells.

“Sleigh bells and bobtails, if you were wondering,” volunteered Bree before Fin could ask. “Exactly like in the song, except it won’t be a one-horse open sleigh!”

They quickly finished the harnessing. Fin and Maryam pulled the sleigh from its stall and hooked it up to the harness. The sleigh itself was larger than Fin had expected, with a wide bench for the driver elevated slightly above two lower benches, facing each other, for passengers. He was even more surprised when Maryam pulled one of the passenger benches out and indicated he should grab the other one.

“You two will be up front with me. We’re going to pick up some packages.”

“Packages? In the woods?” Fin seemed more than a little skeptical, and was beginning to wonder what they’d gotten themselves into. He checked to make sure he had his cell phone on him just in case.

Maryam gave him a broad grin and held his gaze for a few moments with her eyes. “Yes, packages. It’s Christmas time, after all. There are a few families that live out here that make hand-crafted toys for children that wouldn’t receive them otherwise. Thing is, these wood folks don’t have the means to get out and about very easily. So we’re going to swing by their homes to gather the gifts.”

“They always do, but the toys always manage to get finished and delivered by Christmas day. And this year, you two get to be a part of it! Be aware, though: some of the folks we’re visiting will be… unexpected. They’re all perfectly friendly though, even if they seem strange.” Maryam smiled warmly, then leapt nimbly onto the driver’s bench. Bree and Fin each used the step but didn’t have any trouble getting situated. As soon as they were, Maryam gave a gentle flick of the reigns, calling “Git!” The horses launched forward, causing both Bree and Fin to almost tumble over the back of the low bench seat. Maryam let out a hearty laugh as the horses raced out of the back yard and toward a well-worn track leading to the woods.
Posted by Rusty Bentley at 8:41 AM