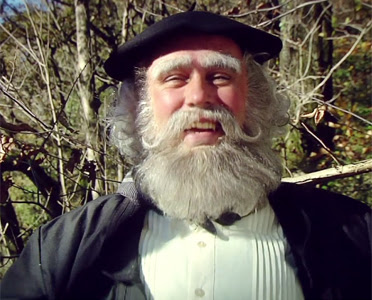 The sky was a dusky rose fading to purple by the time they emerged from the woods into a clearing in a slight valley at the base of a massive foothill. The bottom of the foothill was itself obscured by a massive house. Fin could tell that the house was not only large, but built largely. The front double doors must’ve been at least twelve feet tall and half again as wide, with equally large windows on either side. Fin thought he could see a shadow moving behind one of the windows just before the front doors were flung open. The largest man Fin had ever seen stood inside. The man must have been close to eight feet tall, and was wearing a beret of some kind. It covered the top of his head, but his bushy hair spilled out from under it in dark gray and white streaks. He also wore a warm-looking vest made of some kind of light colored fur, but perhaps the oddest part of his outfit were his shoes. They appeared to be almost dancer’s shoes or slippers, with ribbons or laces that ran criss-crossed up and around his lower legs all the way to his knees.

He let out a boisterous laugh on seeing Bree and Fin’s expressions and started speaking rapidly to Maryam in a language that seemed familiar but which neither Bree nor Fin could quite understand, something between Latin and Spanish. Maryam laughed back at the large man, replying in the same language. A moment later, the man went back inside and quickly returned with a bag that was just as large as the one they already had.

“Maryam, I’m not sure that bag’s going to fit back there,” Fin said, glancing back at the mostly full cargo space.

“There you go again with what will and won’t fit. It’ll fit just fine, Fin! Trust me, my boy!”

Fin glanced back at her skeptically as the large man brought his bag up and slung it over the side. Strangely, it landed with a sigh, not clanking into the bottom as Fin had expected. The giant reached over to make an adjustment, moving both bags around slightly. Finley turned to look back at the situation, and was surprised to see that the two bags were sitting neatly side by side, with room to spare. In fact, the first bag seemed to be in even better shape than it was at the river.

The man said something to Fin and Bree that they didn’t understand. Instinctively, Bree held her hand out to him. He smiled and took it, then looked at Fin expectantly. Fin extended his hand, which was taken by the man. The man’s giant hand completely engulfed Fin’s. His grip was firm and strong, but as gentle as the first warm rain of spring. He said something else to them, just above a whisper, and once again they felt like they were on the edge of understanding, but not quite grasping. He released their hands, said something to Maryam, tipped his hat to all of them, then stepped back. As soon as he did, the horses took off.

Maryam turned in the bench as they pulled away and playfully blew the man a kiss. His hearty laughter could be heard rolling around the clearing and into the woods for quite a time afterward.
Posted by Rusty Bentley at 7:10 AM