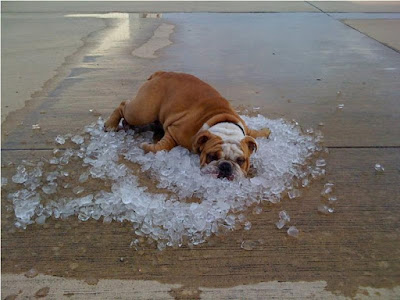 July in Texas... after a very pleasant June, summer is finally upon us.  With summer in Texas comes unbearable heat.  When I say "unbearable" here, I mean it's so hot that bears begin their annual migration to the north, trading in their darker colored fur coats for those of purest white.  That's right folks, you heard it here first -- the reason polar bears exist is because of summers in Texas, not because of natural selection processes.

With the heat as it is, it's extremely difficult to find a window of time to run outside where you can actually finish the run and not get second degree burns on your feet from the heat radiating off of the sidewalks.  Well, that's not true, strictly speaking.  There's about 45 minutes between about 6:00 a.m. and 7:00 a.m. during which you could get a good run in.  The main issue with that is because it's so hot, I'm having a harder time getting up that early.  Yes folks, you heard it here first (again) -- sleeping late is directly attributable to summers in Texas.

In any case, we have punted on running for the time being.  Instead, we are getting a 30 minute walk in around lunchtime.  Don't bother me with the obvious fact that it's just south of oppressively hot on the thermometer at that time.  We've been really successful at it so far; the only side effect I've observed is the propensity to shower an extra time or two per day.  Suffice to say, walking at lunch is a thing that we can, surprisingly, do with consistency.  We've even managed to get a couple of easy hikes in! 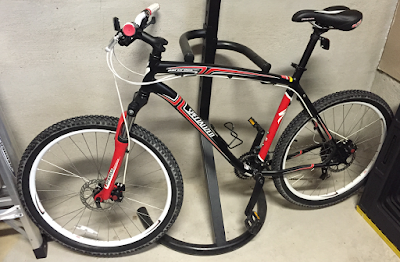 Right before our trip to California, we went biking for the first time in 5 years.  We'd had the bikes serviced, we had our gear ready -- everything was set.  Our fearless leader Marco (a magnificent triathlete) had chosen an "easy" 22 mile ride for us north of the DFW metroplex.

Why I thought this was a good idea in any way, shape, or form, I can't clearly recall.

The first 15 miles or so were pretty smooth.  There were some hills, some nice scenery, and good times were had by all.  However, within the space of about 2 miles after that, I realized what a huge mistake I'd made.  The main issue was cramping.  Both of my thighs began cramping in such a way that I couldn't get any relief from the cramps: not riding, not standing, not sitting, not stopped, not lying down, not severing my legs.  We still had 5 miles to go, and I didn't think I could ride any further.

The second problem was that standard mountain bike seats are not very comfortable.  Let me elaborate further on that.  For those of you that don't own a standard mountain bike, I'll let you in on a secret: the seats are NOT MEANT TO BE SAT UPON BY ANYONE WITH A BUTT.  They are tiny torture devices created to remind you that the human butt, while providing natural padding via muscle and fat in normal situations, can render some of the most uncomfortable pain when injured.  If I ever meet the sadistic son-of-a-bitch that designed my original bike seat, I'm going to do two things: 1) punch him straight in the face with a bike-seat-shaped fist, and 2) introduce him to my brilliant and ideal bike seat design (think La-Z-Boy meets go-go-gadget-pedals).

Marco, realizing I was in serious trouble, actually pushed me the last few miles.  It was a very strange feeling for me, not because I was being assisted by someone working harder than I was, but because I felt both in awe of and terrible hatred for Marco.  Luckily, Marco is one of the genuinely nicest people I know, and I quickly forgave him.  Plus, I rigged it so his bike would be stuck in 32nd gear for his next ride.

I learned several lessons from this ride.  The first was that dehydration in general is not the main cause of cramps (at least in this case); it is actually a lack of sodium and other electrolytes.  As it turns out, Marco commonly mixes sodium/electrolyte tablets into his drinking water when he rides.  We did independent research and bought some tablets for our next ride.  They happen to be the same set Marco uses.

Secondly, I need to work up to that mileage/duration of physical activity.  Given that we haven't done anything active for two full hours since... well, all of history, means that we probably would have suffered regardless of the sport.  Tanya and I are going to start biking a little more regularly, but we're going to go for an hour or so at a time until we get our bike legs into a little better shape.

Finally, doing something completely out of the ordinary right before a work trip is a monstrously bad idea.  I got lucky this time and managed to recover enough to where the plane ride was ok.  However, the bike ride and subsequent suffering could have made things flat out horrifying for me and those poor souls unfortunate enough to incur my pain-induced wrath.  The fourth in our party of bikers (Marco's wife, Tanya G.), actually wound up at the doctor the next day.

All of this to say, biking is awesome and we're going to do it more (except in a saner way). 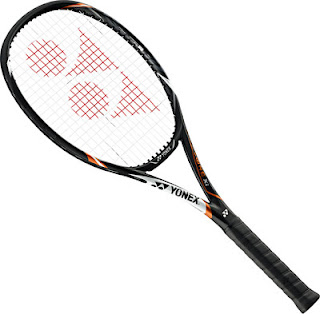 Tanya has always liked tennis (as have I).  It wasn't until she met me that she stopped playing.  This was coincidental, as I never discouraged her.  We simply found other things that we enjoy doing together that didn't require as much effort and discomfort, like sitting around surfing the Internet, watching Big Bang Theory, and basking in the presence of each other's aura.

Sorry, I just got slightly distracted by Tanya's presence... Back to the post!

We have finally decided to start swinging the racquets again.  Part of the reason is because Marco (yes, the triathlete mentioned above) and Tanya (again, she is known as Tanya G., not Tanya my wife) are playing and want us to play with them.  Another reason is because we want to vary our fitness routine in general to keep it interesting.

Imagine our dismay at finding that my racquet (well, Tanya's old racquet that I had been using) was in a sad state of repair when we pulled it out of the attic where it had been for 5 years.  Obviously we needed to get a new one for me, so Tanya did the research and found a Yonex EZone Xi that I like very much.  We went out and hit a few times, enough to realize that I especially would benefit from some lessons.  We're currently looking at signing up for the Advanced Beginner lessons at the local tennis center.  After that, perhaps we'll get into a couple of leagues, and then... maybe... we'll break onto the ATP Seniors tour and give up this silly obsession we have with solving problems through technology...

Finally, we come to swimming.  Swimming is a fantastic activity to do for recreation and fitness for your entire life.  Being low-impact, you can do it despite a certain level of infirmary.  And, since we're in Texas, you can swim outside practically all year round.

We had debated building a pool in our back yard with an endless pool machine.  Given the way Not April Fool's went, I'm very glad we held off.  In lieu of that, Tanya has investigated several options.  There's a swimming center not far from our house that offers lots of classes and clubs.  We're looking at getting into a Swimming for Fitness class or an Advanced Swimming class before we commit to joining a masters swim club.

Granted, we've been talking about swimming for fitness for at least 4 years and have yet to act on it seriously.  This time feels slightly different, however.  For one thing, it's hot enough to sear a steak on the sidewalk.  For another, we seem to be taking fitness more seriously.  This entire year has been full of active things (running, hiking, upcoming active trip to Colorado), and the fact of the matter is that we want to be in the habit of being healthy as we age.  There's no time other than the present to handle that particular issue, so we're taking the steps to do so.  Hopefully this blog entry is evidence of that fact.


I've said that the final post in this series will involve an update on work.  It will, but for those of you not interested in the more mundane portions of the blog, you might consider skipping it.  Aw, who am I kidding?!  You'll love the next one!  Stay tuned!!

Posted by Rusty Bentley at 3:43 PM