It's been a month, part 1: traveling!

Apparently, I've had other things to do besides write blog entries... What have I been up to for the past month?  Quite a bit, actually.  I'll do you a favor and break the info up into a short series of five posts: Traveling, Games, Books, Fitness, and Work.  There will probably be some overlap with several of them.  Let's start with traveling!

I've made a couple of trips in the past month: one to the St. Regis Monarch Beach resort in California, and another to Austin.  Monarch Beach was a work trip where we rolled out the MVP Stay pilot program at the resort (think Android tablets in resort rooms providing awareness advertising to the guests staying there).  It also provided me the opportunity to meet up with Pat and her SO and friend in Santa Monica.  We are terrible at taking pictures, especially at night, but here's a (blurry) shot that I like: 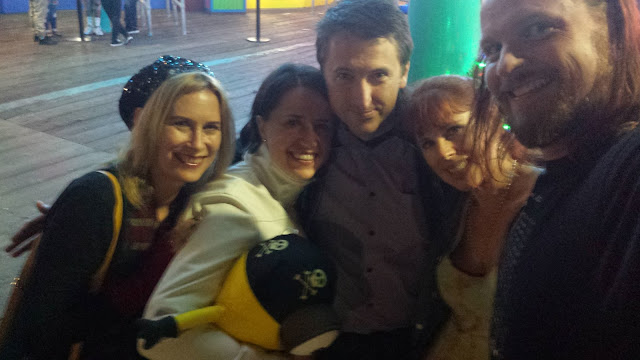 And yes, that's a minion in Tanya's arms.  Ken (the guy on the right) actually won it for me, but I gifted it to Tanya.  He (the minion, not Ken) now sits in my office in any case.

The Austin trip was a college buddy "camping" trip.  Why we persist in calling it "camping," I'm not sure.  Even though the trip originally entailed tents, sleeping bags, fire pits, etc, it hasn't been "camping" in almost 10 years.  For me, it is now a lot of time in a swimming pool drinking beer, an annual round of golf, an annual poker tournament, an abandonment of anything resembling fitness and diet, and a great time of fellowship with guys that I only get to see once every year or two.  No pictures allowed at this event, though.  The new experience this year was purchasing and playing Civilization V.  More on that in the gaming post...

We've got one more pre-planned trip coming up.  We're going to Colorado for a semi-active vacation with the boys.  I'm not sure either boy is ready even for the "semi" part of the activities, but Tanya and I are determined to get them outside a bit while they're still somewhat young and impressionable.  We'll be riding the Durango-Silverton steam train, going rafting, taking an all-day hike, and learning stuff at Mesa Verde.  It will be the first time the boys have seen mountains in real life.  I hope they're as impressed as I was the first time I saw them.

In other traveling news, I'm teaching Garrett to drive.  He's already 16, but hasn't shown any real interesting in learning to drive.  I recently asked him why that was, and he said "well, there's nowhere I really want or need to go."  I distinctly remember wanting and needing to get my license as soon as I turned 16.  I wanted to drive myself to school, the store, Brian's house, or other places as needed.  I wanted to be able to cruise 57th (not that I ever did, but being able to was a big deal).  I suppose it was more disconnected time... the Internet in general and cell phones weren't a thing and entertainment was harder to come by.  Ah, to be a kid in today's society!  How many video games would I be playing right now?

Speaking of video games... stay tuned for the Gaming installment!
Posted by Rusty Bentley at 11:27 AM