In part 2 of my "It's been a month" series, I touch on the games that we've been playing lately.

Civilization V was originally released in 2010.  Gabriel has played it off and on for at least a year now, but I didn't pick it up until a couple of weeks ago at my annual "camping" trip.  As it turns out, it's a fantastic game.  It would have to be for people to continue to create downloadable content for the thing five years after its initial release!

For some reason, I really didn't think that I like turn-based or real-time strategy games.  However, when I take stock of the ones that immediately come to mind (Dune 2, Masters of Orion, and Civ V), I realize I actually do enjoy them quite a bit.  The problem with them is that they require a lot of time/dedication to get good at, and I've got a lot on my plate.  ;-)  Still, Gabriel and I managed to start a multi-player Civ V game and play together long enough to realize he needs a new computer.  I can remember those days of needing to constantly upgrade my machine to keep up with the Origin games of the day... Wait, didn't I just say Civ V was five years old?  Isn't Gabriel's laptop a 5-year-old state-of-the-art machine?!  Apparently the DLC acts like new games from the requirements perspective.

We've had the Settlers of Catan board game for a couple of months now, and realized that we like it well enough to consider playing it during the down times on vacation.  The problem there is that the box is quite bulky, and who wants to pack a board game in a suitcase anyway?  As a result, we picked up the iPad version.  It's not perfect, but it's certainly playable.  I think that the AI cheats in favor of itself though...  You would not believe how many 4s, 10s, and non-6-8s get rolled when the AI is in trouble.

There are also a couple of things that are annoying, which are probably correct according to the rulebook but that haven't been done according to our house rules.  For example, you can trade and build at any time during your turn, alternating the actions until you're done.  Another thing is that once you've purchased a development card, you can't play a development card that you've secured on another turn.

The biggest issue, however is that fact that you can't tell what happens on any turn other than your own.  The idea around the iPad game is that you pass the iPad to the person taking the current action.  When it's your turn, you hold the iPad, but if you want to trade with someone, you initiate the trade then hand the iPad to the target person and wait to see what they do.  You act like this so that you can't see the cards that everyone else is holding.  The fundamental problem is that you have absolutely no idea what happens between turns, since you can't look at the board on other people's turns, including the rolls.  You can't tell what was rolled, who might've gotten what, etc.  If you're holding a Monopoly card, how do you know when to use it?  If someone rolls a robber, how do you know what to discard?  Ultimately, I suspect it's designed such that you can watch the rolls without seeing what the current player's cards are, but it would be a close thing.

These issues won't prevent us from playing it, however.  Someone's got to have bragging rights about being the ruler of the imaginary island we explore while on vacation...

And Dungeons and Dragons continues.  The boys and I set up a regular game night (dedicated to D&D): Tuesdays, starting between 6 and 7, and going until 9 or 10. 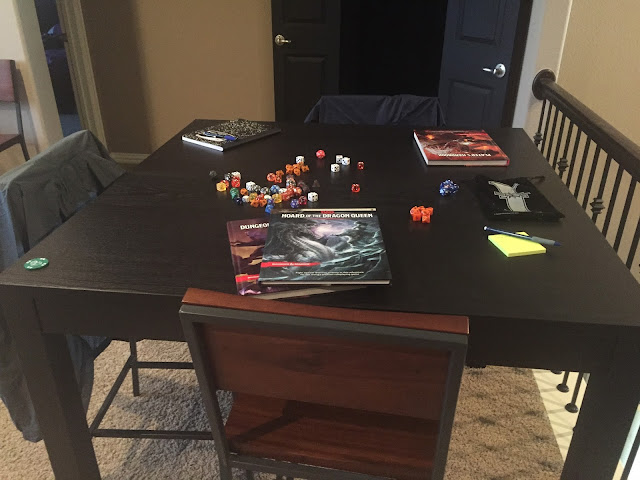 It's a classic setup -- this gaming table is upstairs and seats 4, although we have it arranged to seat three currently.  I sit in the seat nearest you with two books near it, Gabriel to the left and Garrett opposite.  Actually, Gabriel migrates back and forth between that position and his laptop on the couch (to the left, out of picture), where he keeps his character sheet.  I typically have my Mac on the right corner, from which I manage my NPCs and the soundtrack.  Garrett goes old school, using the notebook on the far left corner to keep track of everything by hand.  It's ironic that he's the only one that uses a dice-rolling app; both Gabriel and I use the dice on the table.  The blue dice to the right side are for rolling monsters/traps, the orange dice in front of me for NPCs, and the rest of the dice are fair game for anyone else.  Occasionally we have a game in a game that uses the dice as well, which the boys typically win by cheating.  :-D

We're playing through the Hoard of the Dragon Queen adventure, and everyone seems to be enjoying it pretty well.  Garrett is playing a monk that started with the Way of the Four Elements but has now switched to the Way of the Shadow.  He actually came up with a plausible side quest/story that made sense within the context of our play through, so I allowed it.  Gabriel's rogue even got to participate, where "participate" means that he snuck along behind and almost got killed while going through the Shadow Temple where Garrett made the transformation...  The main NPC I'm playing is a Warlock.  We're all currently 4th level and getting ready to embark on our most dangerous mission yet -- trying to win the favor of a paladin by rough-housing with all the other recruits to his order.  It's going to require arm-wrestling, archery on horseback, sparring with bare hands and weapons, and eating and drinking FAR MORE than necessary.  Wish us luck!  ;-)

Keeping ahead in the adventure far enough to tell a coherent story while not spoiling the entire thing for my NPC has been pretty challenging.  Part of the challenge is that I've currently got quite a lot to read that is not involved with the game.  More on that in the next post -- it's about BOOKS!  Keep your eyes peeled for it!
Posted by Rusty Bentley at 11:00 AM

Email ThisBlogThis!Share to TwitterShare to FacebookShare to Pinterest
Labels: games