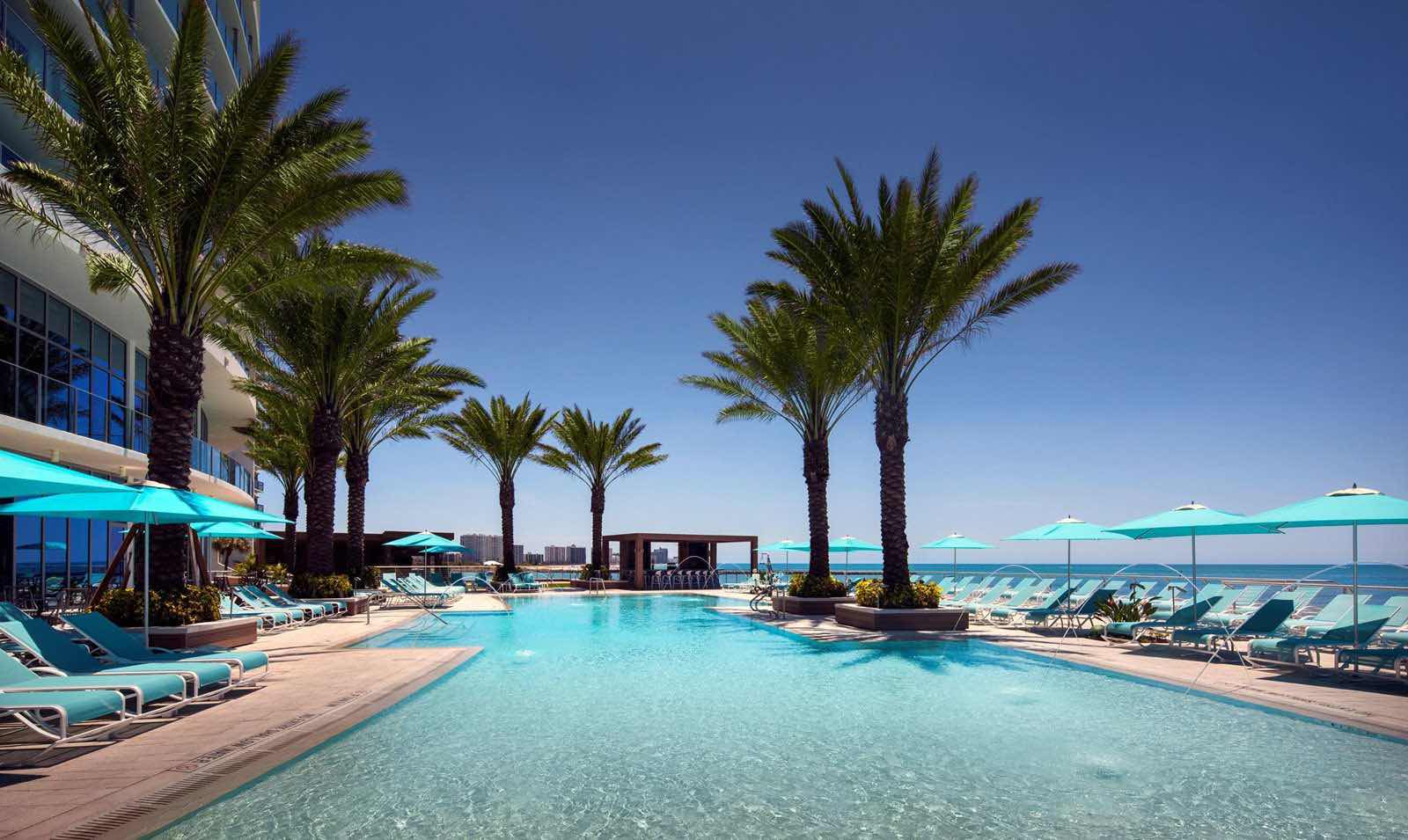 Dawn broke clear and warm on our second day of Spring Vacacay, or at least I assume it did, since the blackout curtains completely prevented me from witnessing it in any form or fashion. In fact, given that the previous day had been full of travel, exploring, and eating and drinking, combined with the moving-the-clock-forward timezone adjustment, we wound up sleeping until just after 09:00. I was quite surprised when I looked at the time, feeling certain that I must be inverting a "6" digit in a sleepiness-induced fit of dyslexia. I rubbed my eyes for a bit, looked again, and confirmed that I had officially achieved the longest sleep-in time of the year. Honestly, as I type this, I can't remember the last time I slept until after 09:00, since most of our travel takes us west, where we gain hours instead of losing them.


I had packed workout clothes, since the resort had a workout facility and I was intent on maintaining my fitness regimen. However, given the relative lateness of the hour, we realized that a morning workout was not in the plans today. Instead, we decided to head out for breakfast.

The breakfast venue was Speggtacular  which was about a half mile’s walk from the hotel. The place was hopping when we got there, but there was a booth in the corner that we were ushered to without hesitation. Speggtacular’s menu was vast, and upon perusing it, I felt my carefully cultivated dietary discipline quickly evaporate. Heck, it's vacation after all, right? Vacation calories don't count, RIGHT?! 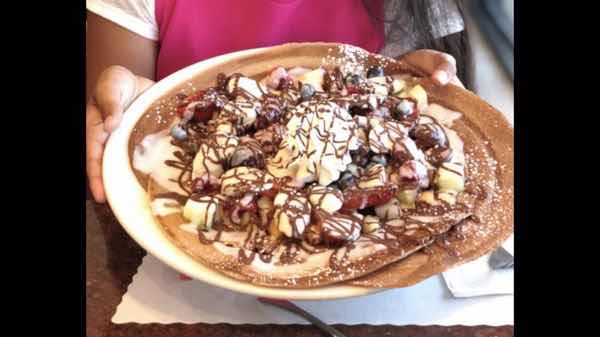 What you see pictured here is actually someone else’s photo of my ALMOST breakfast (pancakes with strawberries, bananas, cream, and chocolate/hazelnut drizzle), but I managed to reign it in a little. Instead, I ordered a more traditional breakfast with eggs, bacon, toast, and a single strawberry and banana pancake with a dusting of powdered sugar. Tanya got a similar ensemble, except that she got a fruity crepe instead of the pancake. It was more food than we should have eaten, but by gannies it was good!

And a special shout-out to our server that day, whose name completely escapes me at this point. They had four servers on a six-server day, and she was running around all over the restaurant, but kept a smile on her face the entire time. It was far more than I could have done, and I was thoroughly impressed by her attitude.

Speggtacular summary: well worth the walk. Would definitely eat there again!

After breakfast, it was finally time to be completely lazy. The beach was crowded and hot already, so we decided to have a look at the hotel pool. The pool might not look it, but given the potential occupancy, it’s actually quite small. Chairs, especially those that are well-shaded, are at a premium. We got immensely lucky to find two open chairs beneath an effective shade on the edge of the pool. 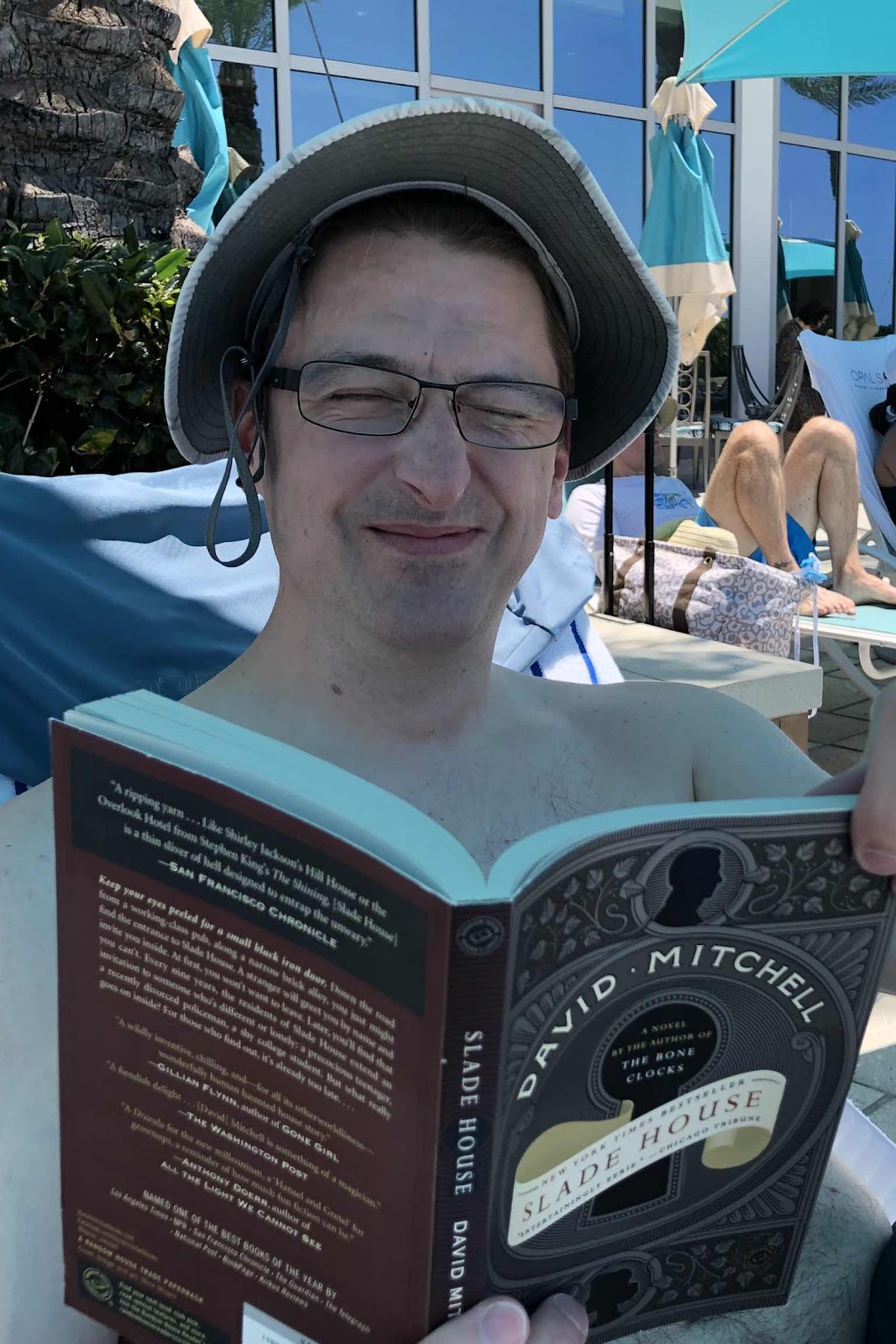 Poolside relaxation should be taken seriously. As you can see, I set about it with an uncommon vigor, immediately digging into an ACTUAL, PHYSICAL BOOK. The book was Slade House by David Mitchell (perhaps best know for Cloud Atlas). It’s a short companion novel to The Bone Clocks, which you should definitely read.

But reading was not the only relaxation of which we partook. You see, the pool was patrolled by helpful serving personnel, including Eliza, the kind lady covering our section. After she handed us a poolside menu, she gave us a minute to look over it, offering recommendations based our our tastes. Given that our tastes were “it should be pleasant and/or refreshing,” there weren’t many limitations. We decided to begin with a couple of selections from the non-frozen cocktails.

By the end of the afternoon, we’d made our way through all but the Bloody Mary variants (which we don’t care for) and the Cuban Punch. We enjoyed all of them, but my favorite was the Opal Rita, because it mixed both rum and tequila. And every drink was served with some fruit decoration. Combine those morsels with the overly large breakfast, and we were set until dinner.

We had to walk a few of those extra calories off, at least. In the later afternoon, we decided to have a stroll down to the beach to see if we’d missed anything significant. The beach’s sand was fine, white, and hot. It was also blessedly free of shells and other debris, so it could be trod upon barefooted without serious risk of injury (besides blistering from the heat). 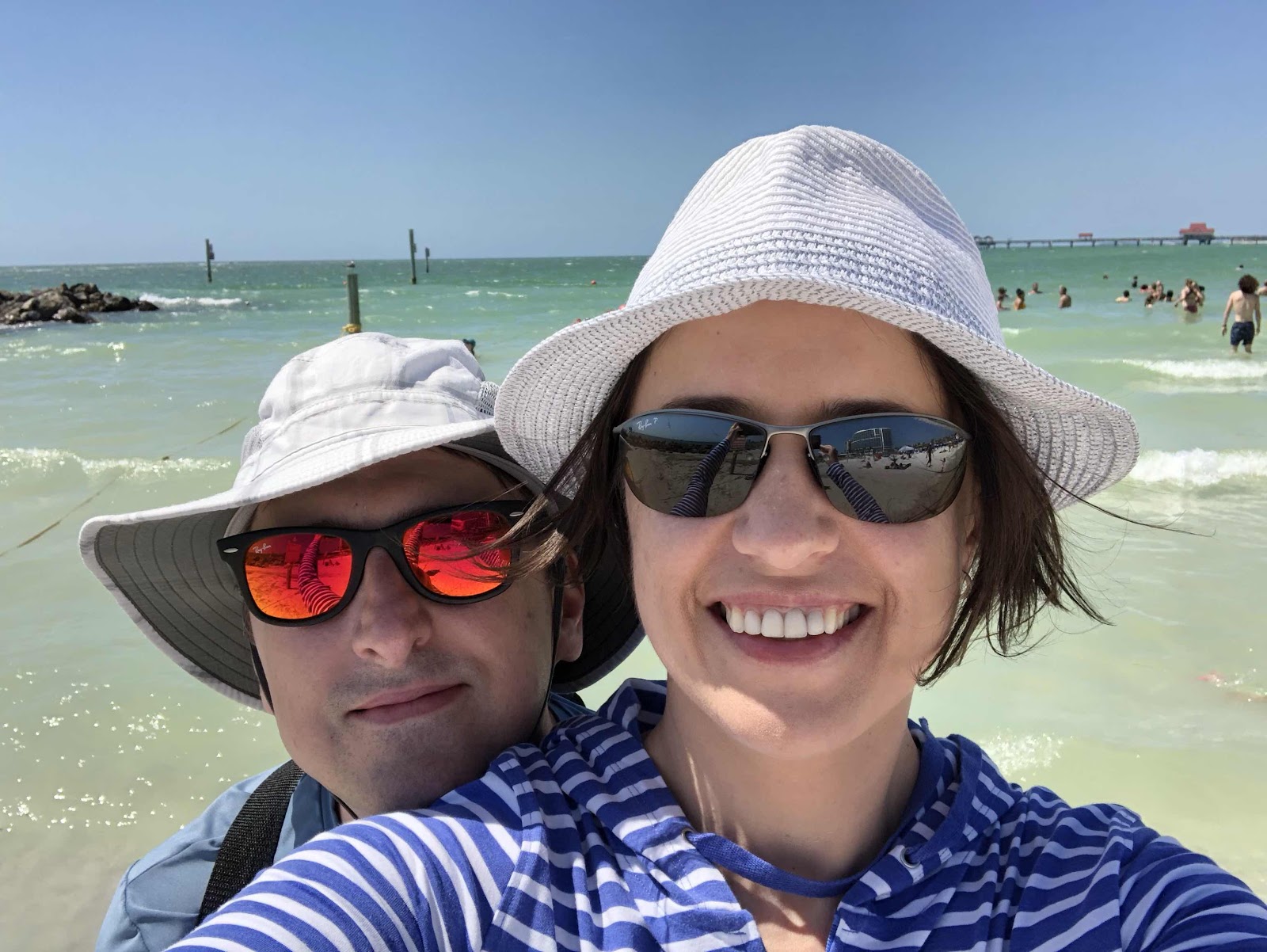 We finished the day with another dinner at Sea-guini. The food was good enough the first night to draw us back again the second. That, and overindulgence during the day helped us realize that a walk to somewhere else on the main drag probably wasn’t going to be worth the effort. And they had a fresh fruit drink that wasn’t on the poolside menu! The quest was obviously not yet complete! 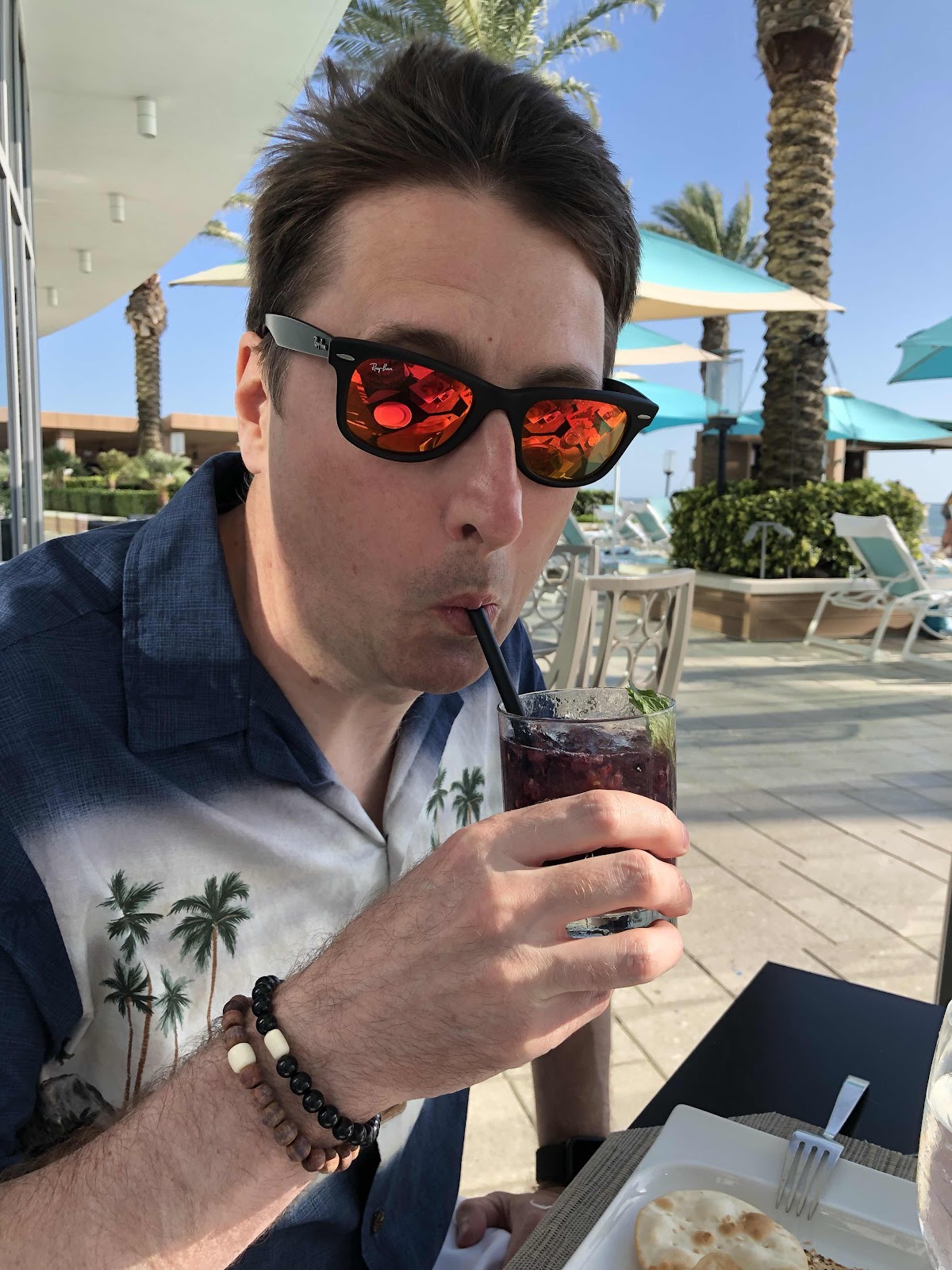 Strangely enough, doing not very much at all besides eating, drinking, and lazing about in the sun and shade can really take it out of you. We walked a little after dinner, but decided to call it a night and watch the sun set from the room. Phone cameras being what they are, there isn’t really a photo to do it justice. Here’s another bad photo of a great view. 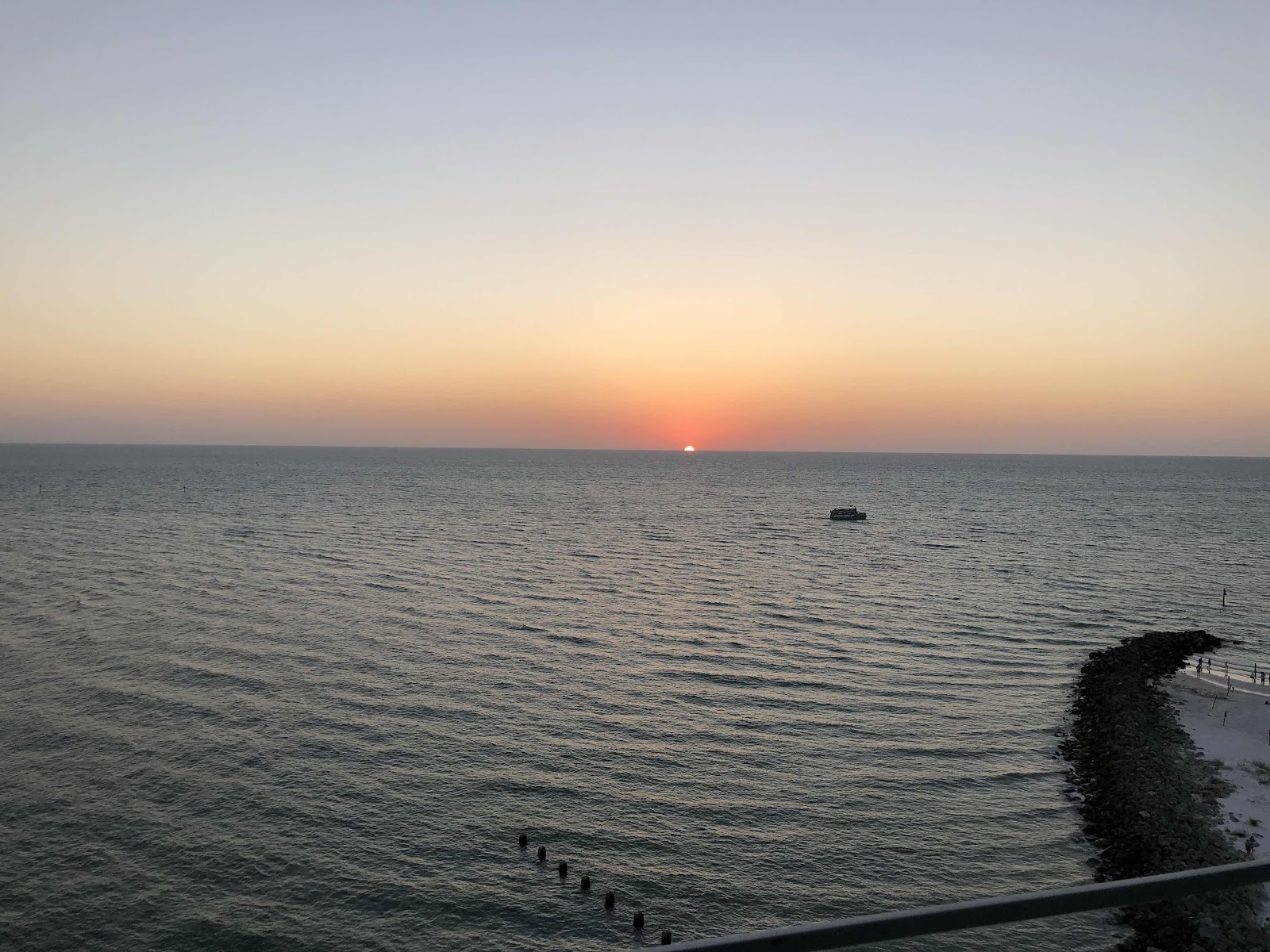 Thus ended day 2 of Spring Vacacay v2019. I’ll warn you that day 3 looked suspiciously like day 2, but that’s a story for another blog entry...

Posted by Rusty Bentley at 9:03 AM