Book Review: "The Heart of What Was Lost" by Tad Williams 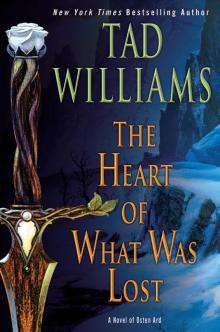 It's been more than twenty years since I've been to Osten Ard, so I wasn't sure how I'd feel stepping back into the world that turned fantasy literature on its head for me. Up until that point, contemporary fantasy for me flowed from the wellsprings of people with names like Weis and Hickman, Feist, and Brooks. Then Tad Williams shoved me straight through a darkened doorway into a world that was darker, more menacing, grittier.

I discovered that I loved it. It resonated with a part of me that I didn't pay much attention to at that point -- the truly human part of me. It was the part of me that realized that things aren't as nice and neat and crisply defined as would make the world an easy and understandable place to be. And for that reason, it felt more real to me than most other fantasy worlds in which I'd immersed myself.

Given all of that, I was slightly trepidatious about re-entering that world. Would I still feel the same? Would it bind me the way it had all those years ago?

"The Heart of What Was Lost" is a short novel that serves as an epilogue to "To Green Angel Tower" and a prologue(?) to Tad Williams' series (in progress) "The Last King of Osten Ard." It tells the story of the disorganized retreat of the Norn to their northern stronghold and their pursuit by Rimmersmen forces under the command of Duke Isgrimnur. The Duke is accompanied by a Sithi, as enigmatic as ever, and in his ranks are two soldiers from the south that didn't expect to be there at all.

We're treated to three main viewpoints: Duke Isgrimnur, Porto (one of the southern soldiers), and Viyeki, a Norn Builder (similar to a civil engineer). I found the Norn viewpoint particularly compelling, as I was originally drawn to the enigmatic nature of the Sithi, and we are reminded about how closely related the Sithi and Norn really are via his story.

The book is remarkably thoughtful and considerate of the reader as well. I've always loved when an author has the ability to make art from both the story and wordsmithing. Tad Williams consistently does this, making it a pleasure to actually read the sentences as well as follow the story. Secondly, he knows that it's been a long time since many readers have read "Of Memory, Sorrow, and Thorn," so he's includes a short essay labeld "An Explanation" in the appendices and points the reader to it in the author's notes at the beginning of the book. The essay serves to warm you up and reintroduce you to some of the events and concepts from Osten Ard. I found this to be well crafted and immensely helpful.

Finally, I said it was short. I meant it. And yes, I'm as surprised as you are about that. The whole thing, including appendices is 210 pages. This is the shortest Tad Williams book I've read, by far. To be fair, I'm just getting into the Bobby Dollar books, but even those are 400 pagers in paperback. This book was just the right size for the start of the year.

Thank you, Tad, for letting us back into this world. I'm looking forward to at least one more long adventure there!
Posted by Rusty Bentley at 9:02 PM