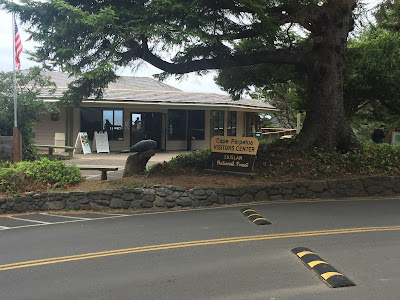 Our original plan for today was to get up bright and early and get to the park (not the chopper) before the crowds did.  As it turns out, nature had a slightly different plan for us.  Despite weather.com telling us there was only a 10% chance of rain this week, the morning broke soggily.  It rained, drizzled, and sprinkled for the better part of the morning.  Tanya and I decided to take that opportunity to make a Walmart run for the rest of the supplies we figured we needed for the next few days.  Yes, we just went to the grocery store last night.  Did you not see the mac and cheese banquet from yesterday's picture?  Clearly we needed more of that!

After lunch, we finally headed out to the park.  Our destination was the Cape Perpetua Scenic Area.  Arriving when we did, we had about two hours to kill until high tide (which is the best time to see Thor's Well and Devil's Churn).  We decided to take the walk out to see the Silent Sentinel of the Suislaw, a 600-year-old spruce.
To think -- that tree was alive before Columbus "discovered" America!

We then made our way out to Thor's Well, just before high tide.  There was a great churn further south of the Well, which had an interesting geyser-like spout when the ocean hit it properly.  (I hope the video works...)

Thor's Well is hard to wrap your head around.  It looks like there's a giant hole in the rock, and maybe in the ocean itself.  The water that manages to get in there just seems to fall out of the bottom.

There are some cool tide pools between Thor's Well and Devil's Churn, as well as some shaded walk through the woods.
Devil's Churn seems like a misnomer -- I didn't catch any signs of Lucifer or any other major or minor demons.  It IS quite thunderous though, and it not the kind of thing you'd like to get caught in without a force field of some sort.
We made the quick drive up to top of the observation point.  There are some cool pictures, but we neglected to walk another 1/10th of a mile to the actual West Shelter Observation Point building.  Apparently we didn't read the signs correctly.


We finished the day off at Ona Restaurant.  Neither of the boys seemed all that keen on eating there, having expended all of their energy on the walk itself.  Gabriel deemed the grilled cheese sandwich "too cheesy," and Garrett enjoyed the fish and chips.  I had seafood saffron pasta, while Tanya had an excellent salmon.  Add in two desserts, and we were well-fed!

As we finished eating, a group of guys from the Cool Corvette Convention (CCC) started arriving. No pics, unfortunately, but the first two license plates we read were "AT0M1C" and "1962FULE".  Fearing a movie scene where the elites kicked all the commoners out, we made a hasty exit.

Tomorrow, it looks like it's going to be rainy again.  Again, I have to question what kind of lies weather.com has been spreading.  My guess is that they are in collusion with Oregon to get people to come out here near the end of summer with the lure of cool weather sans rain, and then let Oregon dump the sky on them.
Posted by Rusty Bentley at 11:08 AM