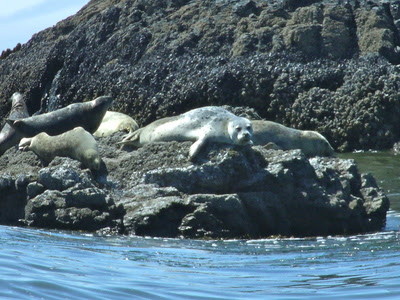 Travel day is almost always the hardest for me, and today was no different.  It didn't help that I'd been traveling for work this past week, so I was already a little run down.  I woke up early to make sure my personal machine had all the setup necessary to get some stuff done for work (just in case, dangit).  We left the house on time, which was great, I managed to read about 25% of "The Once and Future King" on the plane, which was greater, and the flight actually landed early, which was greatest!  Baggage claim was relatively prompt.  Tanya set up Alamo "bypass the desk" pick up, so we got off the bus and went straight to our car.  We were on the road to the vacacay house!

As an aside: on the bus to the rental car facility, a FANTASTIC 89-year-old lady sat next to Garrett and gave him some grandmotherly advice about school and career.  I wish I'd gotten her picture.  She and her gal pal were ALSO on a summer vacacay, and she looked and acted like she was already enjoying it.  :-)

The drive was scheduled to take about 3 hours.  The place we're staying is in Waldport, southwest of Portland.  Even taking the big roads, the drive was pretty scenic.  Lots of really woody areas, a few mountains in the distance, pleasing angle of sunlight... We had a slight snafu in that we couldn't connect the phone to the stereo using the cable, so we didn't get to listen to our traveling music.  Pairing via bluetooth is a necessity in this car, apparently.

As the end of the drive approached, Tanya noticed a bunch of red coloring on the map.  There was apparently a traffic accident on the road just outside of the place where our rental was.  As it turned out, they CLOSED THE ROAD, so we had to take a detour.  Getting stuck behind a Winnebago on a 10-mile detour at the end of a long travel session was more than mildly frustrating, but we weathered it with as much grace as we could muster.  We needed to get into town to get a batch of groceries in any case.  Passing the ambulance on our way reminded us about how lucky we actually were and are. :-|

On leaving the grocery store, we approached our rental from the other direction, only to be redirected AGAIN, as the road was still closed.  We were south of our rental, approaching from that direction.  The accident was between us and where we needed to turn into the rental, so we had to go through the detour again.  No Winnebago this time -- count your blessings and all that.  We got back to the main road, turn south (since we're north of the accident now), and about a mile before we get to the turn in for the rental, we noticed a long stream of cars coming up from the south.  The wreck had been cleared!  We finally made it to the house!

About the house -- it's not much to rave about in an of itself.  However, if you've made it this far into the post, thank you for fighting through it as I have to fight through travel days.  Hopefully the view pics are worth the effort.

I'm going to try to make entries daily so vicarious vacacays can be had by all, but we're also going to be hiking and stuff.  If I'm too tired, you'll have to simply imagine all the fun we're having. :-)