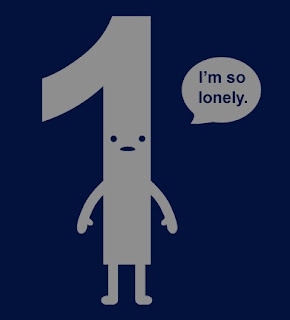 By this time last year, I had written 18 blog entries for the year, with the single entry for June being a book review of "The Magic of Reality" by Richard Dawkins.  I'm behind my mark this year, only having submitted 12 so far.  I would apologize for this, but my hope is that the quality of the content this year has improved.  If it hasn't, feel free to make suggestions in the comments section.  I'm happy to take requests on blog entries.  Then again, if you're already upset by the quality of my posts, I'm not sure you'll like anything I have to say about a topic that might be near and dear to you.  Wow, what a Catch-22 you're in!

With the above said, I don't have any reasonable excuses as to why I haven't written more entries.  I could say that I've been busy, but I don't think I've been any busier than I was at this time last year.  I will say that we've picked up a couple of activities since last we spoke (or I typed and you read).  First of all, we've taken up gardening (box and tomato) and bread-making.  You may recall my earlier blog entry about tomatoes.  That entry was inspired by the fact that Tanya is growing four different kinds of tomatoes in the garden, in addition to rosemary, basil, mint, and stuff in the box.  Overall, the experiments have been fruitful (or leaf-ful, in the case of lettuce).

Bread-making is worthy of a post in and of itself, so I won't comment on it further here other than to say: if you're not making bread for yourself, you should be.  It's delicious, and better for you than almost anything you can buy in a store.  :-)

The second activity is swimming.  Beginning June 1, we started swimming on Monday and Wednesday evenings with North Texas Masters Swimming, coached by Dave Young.  It's only been a month, but I really can't say enough good things about this organization.  First of all, Dave is incredibly knowledgeable about all things swimming.  He's fantastic with instruction, going so far as to record individual laps on his iPad and playing them back to us during the workout for immediate feedback.  He's also funny, which helps when you're struggling with all of the mechanics and techniques.  Secondly, the facility is great and pretty close to our house.  Third, the group itself is friendly and approachable, with lots of different people at different levels offering words of encouragement and advice.  When it gets to be Monday and Wednesday afternoon after work, I'm typically dreading going.  Tanya always talks me into it, and I'm always glad I go.

Beyond that, it's been a pretty normal start to the summer.  The boys are here, and this year we're actually organized about summer activities that will (hopefully) lead to a more productive time than last summer.  We've listed modest goals for them to achieve by the end of the summer, gone through the process of enumerating what it will take to achieve those goals (at a high level), and actually written it all down.  We further spent some time planning how much stuff needs to be done each week to achieve the goals as well as thought about rough dependencies and contingencies.  I've gone so far as to put up tiny scrum boards for them. 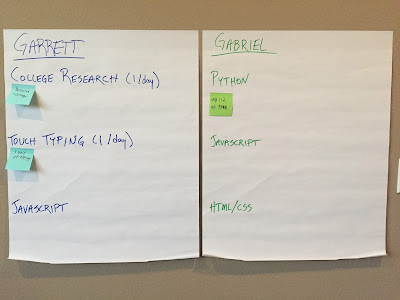 As you can see, Garrett is researching colleges and learning touch typing (which apparently he missed in years 1-3 of high school).  Gabriel is going through scripting courses at codecademy.  Garrett will have tasks in flight from multiple goals per week, while Gabriel will be working through one at a time.

I'm actually pretty interested to see how the boys like this approach, since it's very similar to what I do at work every day.  And for those of you that were wondering -- yes, I considered using a Trello board, but no, I do not sing at the daily stand-up with the boys.  I'm not sure they could take that level of energy that early in the morning (10 a.m. CT).

So that's what's going on so far this summer.  Aside from all this, I'm getting back into the game development that I'd meant to do at least a year ago.  I'm working on the Dark Tower board game in clojure/clojurescript.  It's coming along nicely so far, but not far enough to comment on yet.  Stay tuned for that!
Posted by Rusty Bentley at 6:17 PM