On this, the day after my birthday... 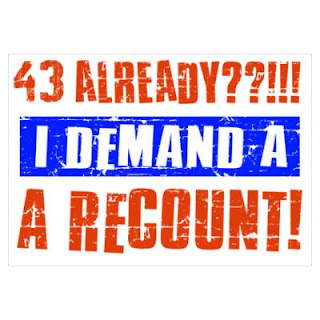 Yesterday marked the 43rd anniversary of the day my mother claims I was born.  I, of course, don't have a clear memory of the event, so I have to take her word for it.  When I questioned her about it, she seemed kind of confused, but then reminded me that I had a birth certificate signed by a medical doctor and filed with the State of Texas.  Apparently she thinks I put faith and trust in "official documentation."  I'm telling you, people: pics, or it didn't happen!

At this point, I'm willing to embrace the symbolism that August 15th embodies for me.  It is, in fact, the day I celebrate my birthday, and a bunch of people took a bit of time out of their other activities to wish me good will.  It meant a lot to me.  I'm very thankful that I've got a circle of virtual friends that I get to talk to, regardless of location, at least a couple of times a year.  Technology is a wonderful thing!

And it truly was a wonderful day.  My wife made me nutella pancakes for breakfast, and followed that up with homemade lemon bars for dessert after a dinner of poached salmon, sticky rice and arugula salad with balsamic dressing.  She also got me 19 books for my birthday -- every book on my kindle wish list cleared out all at once.   Combine that with a visit from Tanya and Marco (along with another book and some highly-sought-after Miyazaki blu-rays), texts from the boys (received at almost the same instant, probably prompted by their mother ;) ) and other friends, a phone call from my mom, and my sister posting half a dozen funny greeting-style cards on Facebook talking about how awesome a brother I am, and I'm left with a lasting sense of well-being.

I can't recall having birthday warm-n-fuzzy hangover before, but I've got it now.

One other thing I like to do at this time of year is introspect and project.  I take a look back on what I've done the past year and see what general things I'd like to do this year.  I haven't done the latter yet, but the former is quite a bucket list.  A lot of it has already been covered in this blog via other posts, so I won't regurgitate it here.  Suffice to say that this year has been one filled with wonder, activity, joy, laughter, and colored by only a little sadness.  I've learned a lot about who I am and experienced things I hadn't expected.  It's been a fantastic year!

Also, in case you didn't realize: Jennifer Lawrence and Ben Affleck have this same anniversary at the same time every year.  Ben and I are actually exactly the same age.  It's entirely possible that he and I are twins, separated at birth by the government/aliens to ensure that we don't dominate mankind with our collective charisma.  As I said, pics or it didn't happen (or did, in this case)...
Posted by Rusty Bentley at 9:11 AM

Email ThisBlogThis!Share to TwitterShare to FacebookShare to Pinterest
Labels: miscellany