Book review: Tunnel In The Sky 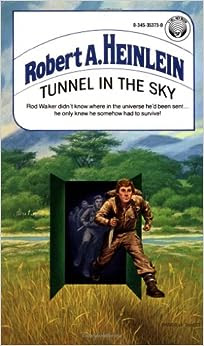 Another one of my recent reads was Tunnel In The Sky, by Robert Heinlein.  This was a book that I tried to read in junior high, but could never really get into.  The problem was that I was supposed to do a book report on it.  As a result, I turned in a book report that was full of good information about the very beginning of the book but that resolved into something completely made up by the end.  Apparently, my junior high English teacher had not read the book either, because I still made an A on it...

This was another audiobook from Audible.com.  The recording was high quality and well-performed.  This was a cast recording instead of a single narrator, and that format typically isn't my favorite because the interactions don't seem all that great.  This time, however, the cast worked really well with each other, and the multiple-narration wasn't distracting at all.

In addition, there were some musical transitions.  These tend to annoy me, because the editing of the music itself and its insertion as transition are typically handled REALLY poorly, making me want to saw my ears off with the spoon with which I'd just gagged myself.  This time, I was very pleasantly surprised that the music was well done, well edited, and facilitated sensible transitions between narrative sections.

4.5 out of 5 stars for the audiobook performance.

For the book itself, I liked it but it didn't knock my socks off.  For some reason, I expected more science fiction out of it.  It tells the story of a group of young adults that are being tested for survivalism on an unknown, but Earth-like, planet.  The test is supposed to last from two to ten days, but something (predictably) goes wrong.  The rest of the book is about the "natural" results of the "something's gone wrong" event.

This book came out in 1955, within a year of Lord of the Flies (1954).  In my opinion, LotF does a better job at telling the adolescent/young adult survivalism story.  Still, I can see where The Hunger Games got a bit of its inspiration, with Tunnel in the Sky having the superior story in every way.  Hint: don't read The Hunger Games beyond the first novel; on the other hand, feel free to read this book.   I certainly enjoyed it enough to recommend it.  :-)