Cabin In The Woods, Pt 1

Or, short summer vacacay, if you prefer. Originally, we had opted NOT to have a summer vacacay since the boys were going on a cruise with their mom and extended family, and I've got a longer trip to Hawaii in September. However, we just couldn't resist the siren call of the Oklahoma woods, so we booked a cabin and left on a Friday to spend a few days "roughing it" in the far reaches of Broken Bow in southeastern Oklahoma.

The drive from DFW to Broken Bow was shorter and nicer than I expected it to be. I'd driven to Broken Bow once before, years ago, in the days pre-dating Google Maps. It took close to five hours that time, but this time the drive was right around three hours -- perfect for a weekend jaunt. It also gave me an excuse to play my favorite travelling music: "There Came An Echo," by Big Giant Circles. You should definitely check out ALL of his stuff -- it's all well worth the listen and subsequent purchase!

We made it to the cabin and settled in. After milling about for a bit, we decided to try to find somewhere to eat. A lot of vacacay is about eating, after all. The first place we tried was Rolling Fork. 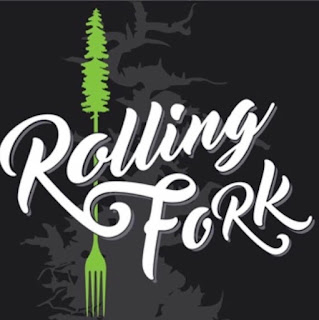 This place is simply fantastic. They serve natural artisan foods... in the middle of Hochatown, Oklahoma. I can't describe how pleasantly surprised I was that Tanya found this place. We enjoyed it so much that we wound up going back again the next day to pick up a lunch to go.

The first day ended with relaxing at the home-away-from-home. We made sure all the electronics worked, entertained ourselves, and made an early evening of it. We had an active day planned on the 'morrow.

The day began with us hiking in Hochatown State Park. Tanya and I wound up making this trek alone, since both boys and "accidentally" stayed up really late and didn't feel up to walking through nature with us.

The walk was really pleasant. There was some rain in the forecast, but it held off while we walked. The clouds kept the heat index down a little too, which was not quite refreshing. The humidity, after all, made us feel like damp washcloths pretty quickly.

I did manage to make a friend on the trail. Millipedes were all over the place. We first passed a dead one on the trail about five minutes in, and I saw about a half dozen more during our walk. This one, though... we were buddies. I called him Miles the Millipede. He didn't seem to mind.


Strangely enough, I managed to get flea-bitten on the ankles, even though I was wearing long socks, pants, AND bug spray. Apparently I didn't spray my ankles adequately. Perhaps I've learned my lesson... but don't count on it. Fleas gotta eat too!

Dinner on Day 2 was at The Moon Tower Bar and Grill. This was another place I liked very well, and the only restaurant we went to in the direction AWAY from Broken Bow (and towards Arkansas).

This was one of those kinds of places that had an eating challenge. I can't remember what exactly it was... a 48 or 60 ounce steak of some sort. It sounded painful, and I didn't try to find any wall of champions. Still, our food was good, and I enjoyed the ambiance. It reminded me of... well, most of the bars and grills from around where I grew up in central Texas.

The final activity of the day was cracking open Settlers of Catan. This is a board game that we tend to play at least once a summer. This year, we added the Cities and Knights expansion, which made the game significantly longer for us. So long, in fact, that we had to pause the game and return to it the next day.

Posted by Rusty Bentley at 7:58 PM