And here you thought it would be November 30th before you got another post...

November has, admittedly, been a busy month both personally and professionally. On the work front, we've been trying to secure a deal with a new, rather large, client. The good news is that the client is not only very interested in our product, but more highly motivated than we'd anticipated. We've had several sets of discovery meetings, and I'm happy to say that we're now engaged in a proof-of-concept implementation with them. We are VERY excited about this.

On the personal front, I need to offer full disclosure to you. I had surgery about halfway through October that has kept me pretty inactive for the past six weeks. That, in some ways, is a good thing. The forced inactivity allowed me some extra time to do something that I've wanted to do for years and never got the full motivation to finish...

This year, I entered NaNoWriMo again, for the first time in a long time.

For those of you that aren't familiar with NaNoWriMo and didn't click the link, here's the executive summary.

Valuing enthusiasm, determination, and a deadline, NaNoWriMo is for anyone who has ever thought about writing a novel.
<end snip>

I first heard about NaNoWriMo at least seven years ago (and most likely eight or more). That first year, I had a severe false start and only got about 6,000 words in before giving up. The second year I doubled that total, but also fell flat on my face at that point. As a side note, that was the year that my friend Staci Linson entered and produced a book that might still be unfinished at 100,000 words (if memory serves). The next several years were no-go's for me altogether, although I considered it every year. I always managed to find "reasons" not to do it.

But this year was different. I had been getting up early to work out since the spring, and then surgery happened. So when November rolled around, I knew I could carve an hour out of the day just by getting back into the "waking up early" routine. I also had at least a vague sense of what I could write about as well. I created my official NaNoWriMo profile on Hallowe'en; I was all set to go. I set the alarm for 5:30 the next morning, and fell quickly asleep. 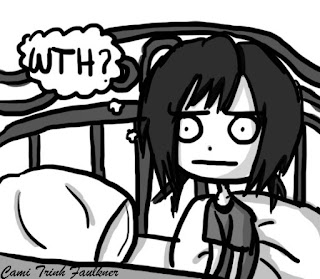 I woke up from a dream before my alarm went off on November 1. The dream was an interesting one. I made the decision to use that dream as the basis for my NaNoWriMo story instead of the original vague thoughts I'd had. I realized it was a completely different direction and that I had absolutely no idea of where it would go (much less how it would end), but I trusted that something interesting would evolve. I later found out that NaNoWriMo has a badge for this behavior. I am a Pantser. Simply put, a plotter is someone who plans out the entire novel before writing it. A pantser is someone who, “flies by the seat of their pants,” meaning they don't plan out anything, or plan very little. Some people, call themselves “plantsers,” which means they're in a little of both. (thanks to The Writing Practice for the succinct definitions).

So, I had a brand new story in my head. I opened Scrivener, created a new novel project, and started writing. What happened next was completely unexpected, and I look forward to telling you about it in the next installment.

And yes, I know I'm an incorrigible tease...

Posted by Rusty Bentley at 6:31 PM