Today we hit the road early in order to beat the traffic and get out to Anacortes and Deception Pass in a timely manner.  Little did we know that there was a Convertible + Personalized License Plate convention going on somewhere up there.  We passed a Corvette convertible with the license plate "EVILELF", a Nissan 350Z convertible with "GRAMS Z", and *another* Corvette convertible with "KOOLWHP", all within about 5 miles of each other.  I am *not* making this up.  You guys should know I'm not that creative...

Convertibles aside, the drive up was very scenic despite being mostly freeway.  We made it to the Deception Pass State Park a little after 9:30 a.m. and began walking immediately.

There are a couple of walking trails to wander on, and we did both.  The northern trail was the most interesting and offered the best views of all the natures.  Who would have thought that an island could be so densely populated by trees?


Near the far end of the northern trail stands a statue carved of wood.  I didn't get great pictures of it, but here are its two faces: 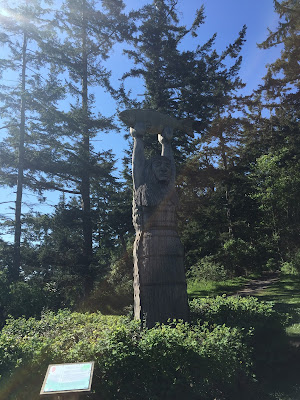 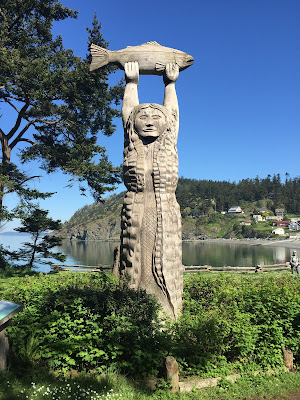 There are four placards around the statue telling the story of the Maiden of Deception Pass.  I love finding stories like this as we adventure!  You should read the story for yourself.  I'd be interested to know what others thought of it...

This is also near the spot where the now (in)famous Double Rusty picture was taken.  For reference:

This trail was the longer of the two, totaling about 3 miles round trip.  Finishing that one, we moved on to the other two trails towards Lighthouse Point and Lottie Point.  Lighthouse Point was cool for two reasons: 1) suddenly, a field of flowers, and 2) a nice little beach where a seal was sighted (although no picture was captured, unfortunately).

Lottie Point was... not nearly as exciting.  Honestly, the point was really hard to see through the trees, and the point itself was pretty inaccessible.  You'll have to console yourselves with another picture of Tanya walking through trees.

These two trails were between 2.5 and 3 miles together, bringing our total to about 6 for the day.  We made one more stop at the southern end of the Park for a shot on the beach back toward Lighthouse Point and a late lunch.  I even managed to skip a couple of rocks.

Deception Pass was definitely worth the effort, especially the northern trail.  Four enthusiastic thumbs up!  Would explore again!

For those of you that are wondering, I have NO REAL IDEA of what's on the agenda for tomorrow.  The weather doesn't look like it's going to hold, so tomorrow's outing will be even more of a game-time decision than usual.  Here's to hoping it's at least SUPER GREAT!  :-D

Posted by Rusty Bentley at 9:33 PM