Around our house and family, we don't really have many Christmas/Holiday traditions.  The season is very busy -- socially, work-wise, and involves lots of travel.  This year was no exception.

It all starts one of two ways.  During years where the boys spend Christmas with me, I pick them up and bring them back to the metroplex with me on the Friday when they get out of school.  This is the first of a couple of 3-hour road trips we take over the course of less than two weeks.

Regardless of when we pick the boys up, Tanya's birthday party occurs on the Saturday prior to Christmas (unless Christmas falls on a Sunday, when it will be up in the air).  We (almost) always host it at our house, and we typically spend the day preparing the food and house for the occasion.  This year, Igor and Anjelika's youngest sons came with them, so I split time between hanging with the adults and playing video games with the boys.

This timing coincides with my father's side of the family having a Christmas celebration somewhere near Abilene, Texas.  I get to hear about all of the shenanigans without having to be caught up in them, which is probably a good thing.  One of these years, we'll be able to make it out there.  Until then, keep it silly, Bentley Clan!

Work continues until a couple of days before Christmas.  This year, we managed to not be on call during the week, although I still acknowledged a couple of alerts and checked on the dashboards.  So yes, I took my work computer with me, in case you were wondering.  I promise, most of the time I was on it, I was just checking social media or working on Cartagena (which is done-ish... more on that in another post).

My parents have an anniversary two days before Christmas, and we like to take them out to dinner to celebrate.  We drive to Salado (second 3-hour road trip) to do so (picking up my boys on the way in years when they're not already with us).  When you've been together as long as my parents have, I think treating them to a meal which they didn't have to prepare or clean up from is a better gift than something coinciding with a yearly theme.

Christmas Eve is the time for opening gifts for us.  This is usually because everyone wants to do a little something in their own houses early on Christmas morning.  It's also relatively easy to get everyone together on Christmas Eve.  I was, apparently, a good boy this year, receiving headphones, a book, a day-hiking backpack, a Miyazaki movie, a t-shirt, CDs, candy, and cash.

Christmas Day, then, is for stockings.  More candy to be found in mine, along with an orange.  The orange is a Christmas Tradition, meant to represent prosperity (monetary, usually), that my mom always adheres to.  The irony is that I always appreciate getting it, but I rarely actually eat it.  Honestly, who wants to eat a piece of fruit that they've just pulled out of a musty old sock? 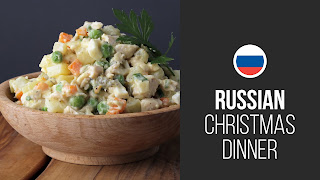 We then travel back home (3rd 3-hour road trip) in order to prepare for Russian Christmas, which takes place on the Saturday following Christmas (tomorrow, in this year's case).  In years where the boys start Christmas with us, they get dropped off on the way; otherwise, they come with us.  Russian Christmas is hosted by either Tanya G. or Anjelika.  Pictured here is goroshek (Russian pea salad), which we will be bringing.  This is another evening with the folks from Tanya's party, so time is spent playing with kids and adults in their turn.

The following week, counter to popular belief, is actually a productive work week for us.  We'll stop working early on New Year's Eve, however.  In years when we pick the boys up after Christmas, we will stay up playing board games or video games until midnight on New Year's Eve, at which point we'll watch the ball drop and drink grape juice of varying ferment levels.  The trip back to drop the boys off happens the next day at some point (although I'm not counting this 3-hour trip, since I counted the one where I pick them up first).

You know, I started off this blog post by stating that we don't have many traditions.  Upon further reflection, I'm forced to admit that is not the case.  Everything I've described above has happened in multiple years, and if it's not a tradition yet, it soon will be.

All of that to say, I'm very thankful that these traditions, and everyone involved with them, exist.  I hope that everyone reading this has had and continues to have very Happy Holidays!

Posted by Rusty Bentley at 9:08 PM