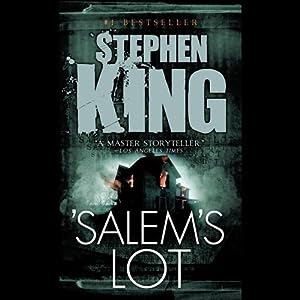 Another book done!  This time, it was 'Salem's Lot, by Stephen King.  While I'm not a Stephen King fanboi, I do like his style quite a bit and marvel at his productivity.  I can only recall one book of his that I've read that I didn't care for very much: The Eyes of the Dragon.  I won't cover why here, except to say that I liked it OK but didn't think it compared well to his other works.

Back to the subject at hand.  This.  Book.  Is.  FANTASTIC!  Stephen King calls it his "coming out" book, being the first lengthy novel he'd written immediately after Carrie.  As usual, I won't give you any spoilers that aren't in the forward itself: this book is a vampire story, combining the characterizations of both Bram Stoker's lead and more pulpy villains from comics from Stephen King's childhood.  As always, there's a writer as one of the lead characters, as well as a younger character that resembles the writer as a child.  Given that most of the Stephen King stuff I've read is out of order from the chronological publishing date perspective, this is probably one of the first appearances of this mechanism.  It doesn't bother me at all.  :-)

Content: 5 out of 5 stars.  Yes, you read that correctly -- 5 stars.  You should read this book if you haven't already.

And also as usual, I "read" the book via audible.com.  The narrator (aside from Stephen King's reading the forward himself) was Ron McLarty.  I thought his handling of the accents as well as the intonations used to distinguish the characters was great.  It got a little muddy at times where four male characters were in the room speaking to each other, but I didn't stumble too much.

I don't recall much production value beyond the narration itself -- no background or transitional music at all, no sound effects, etc.  Given that most of the time the sounds are more a distraction than anything else (this isn't a radio program, after all), this is absolutely fine with me.

TL;DR - you should read this book.  Even if audible.com is your only reading option, read it!
Posted by Rusty Bentley at 8:53 AM